Editor’s note: This story has been updated as of April 24 to include new information from Samina “Sam” Sharp, principal at The Silver Vista Group in San Jose, California.

ON THURSDAY, THE bottom fell out of the federal stimulus package aimed at helping small business, including hotels, weather the COVID-19 pandemic.

Appropriations for Paycheck Protection Program loans through the Coronavirus Aid, Relief, & Economic Security Act, all $349 billion, had been distributed. The Small Business Administration, which administers the loans, posted a notice on its website that it could no longer accept new PPP applications until more funds had been appropriated.

“By law, the SBA will not be able to issue new loan approvals once the programs experience a lapse in appropriations,” the statement said. “The high demand we have seen underscores the need for hardworking Americans to have access to relief as soon as possible. We want every eligible small business to participate and get the resources they need.”

Negotiations continued in Congress as House Democrats continue to press for changes in federal legislation that would do so. Primarily, they want more help for underbanked small businesses that have limited access to PPP as well as more money for state and local governments and hospitals.

“As has been clear since last week, Republicans’ bill which fails to address these critical issues cannot get unanimous consent in the House,” Speaker Nancy Pelosi said in a statement.

This was not unforeseen

There were many in the hospitality industry who saw this coming. The CARES Act is great, but it did not go far enough, said Samina “Sam” Sharp, principal at The Silver Vista Group in San Jose, California.

Initially, she encountered some delays with her application to Fremont Bank for a PPP loan, causing her some concern the process would be delayed past the point when funding would be available.

“The money will dry up and at that point I will have to seek some other relief,” she said at the time.

However, that changed shortly after a new round of PPP funding was approved on April 23.

“As of yesterday they said that my PPP application is ready and they’ll be filing it today,” Sharp said on April 24.

One day before the PPP appropriation ended, Cecil Staton, AAHOA president and CEO, had issued a warning to Congress that more funding was needed. On Thursday, after the SBA made its announcement about the appropriations gap, Staton reiterated that call.

“Hotel owners and their employees are among the hardest hit by the economic effects of this pandemic. COVID-19 is placing American small businesses in such distress that the PPP ran out of money in less than two weeks,” he said. “Congress must immediately authorize additional funding for this crucial capital lifeline. The Small Business Administration should also permit lenders to continue submitting applications into a queue while we wait for Congress to act. The House and Senate have indicated they will not return until May. During the lost weeks ahead, many hoteliers will be forced to close their doors and layoff their remaining employees.” 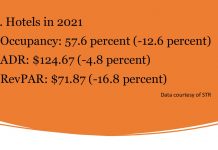