HIGHER THAN EXPECTED leisure travel in the fall led STR to upgrade its forecast for 2020. Expectations for 2021 remain the same as U.S. hotel performance in the first week of November stayed flat.

The U.S. hotel industry will recapture 80 percent of demand by the end of 2021, according to the forecast released by STR and Tourism Economics during the virtual NYU Hospitality Conference. Even then, however, RevPAR will be 34.2 percent lower than in 2019 while ADR and revenue also will see slow recovery as well. Demand is expected to fully recover at the end of 2023 and return to pre-pandemic RevPAR levels by the close of 2024, matching the revised forecast STR released in August.

“Even with the encouraging vaccine news of this week, this pandemic and the subsequent economic impact will continue to limit hotel demand generators into the second half of next year,” said Amanda Hite, STR’s president. “Business demand won’t return at a substantial level until caseloads are better contained, and in the meantime, recovery is going to be primarily driven by lower-tier hotels in the leisure-driven markets with outdoor offerings.”

The economic recovery hinges on how soon the pandemic is gotten under control, said Adam Sacks, president of Tourism Economics.

“The economy has entered a slower stage of recovery and COVID-19 will continue to shape travel conditions in coming quarters,” Sacks said. “Assuming substantial progress is made against the virus in the first half of 2021, we anticipate travel demand will rebound strongly in the second half.”

The first week of November was indicative of that slow recovery. According to STR, occupancy reached 44.2 percent, down slightly from 44.4 percent the prior week and the lowest level since the week ending June 20. It’s also a 35.9 percent decrease from the previous year.

STR’s top 25 markets together followed an ongoing pattern by seeing lower occupancy, 39.9 percent, but higher ADR, $97.13, than all other markets. Phoenix and New Orleans were the only two top markets to see higher than 50 percent occupancy with 50 percent and 53.9 percent respectively.

The top markets with the lowest occupancy levels for the week included Oahu Island, Hawaii, with 24 percent, and Minneapolis/St. Paul, Minnesota-Wisconsin, at 30 percent. 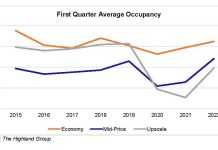