GROSS OPERATING PROFITS for U.S. hotels crept closer to 2019 levels in May, according to STR, with each profitability metric came in higher than any month since February 2020 except for labor. This follows a similar improvement in April.

“April was an encouraging month as more of the top-line improvement we’ve been reporting on flowed through to the bottom line,” said Raquel Ortiz, STR’s assistant director of financial performance. “On a GOP basis, 92 percent of our sample hotels were profitable, which is similar to pre-pandemic levels. Also of note, F&B venue revenue, the restaurants and bars, is recovering right in line with room revenue. Overall F&B of course continues to be bogged down by a lack of group demand and the subsequent spending on catering.”

Ortiz said some improvement could be seen if demand surges over the summer.

“We should continue to see accelerated profitability and improved margins around the industry,” she said. “Labor is the hot topic and we’ll continue to monitor that as demand increases and there is even greater competition for workers to service properties.”

“May was another step forward as more economic reopening and more demand pushed industry-wide profitability further upward,” said Raquel Ortiz, STR’s assistant director of financial performance. “Overall, 95 percent of hotels broke even on a GOP basis, while 73 percent broke even on a net income basis. For context, those percentages were 98 percent and 85 percent in May 2019, so while the improvement is encouraging, many hotels are still experiencing financial difficulty, and even more are seeing staffing issues as evidenced by the stagnant rate of labor costs.

“Many of the properties still experiencing significant struggles are those in the major metros. Those markets finally each reached positive GOPPAR territory, with the warm weather and beach markets like Miami, Phoenix, Los Angeles and San Diego performing the best.”

HotStats also reported increases in profits for May, with GOPPAR at $40.55 in May, a 319 percent increase over the same time a year ago, but 63 percent lower than May 2019. 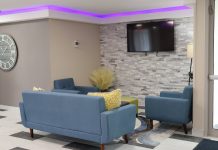