KEN GREENE HAS been named as the new president and CEO of AAHOA. He has served in an interim capacity in the position since June.

Greene, who previously started a consulting firm after serving as Radisson Hotel Group president for the Americas, was selected to fill the president and CEO position by a unanimous vote by the AAHOA board of directors, according to a statement. He was selected for the interim position after the former president and CEO, Cecil Staton, suddenly resigned in June.

“AAHOA has been a part of my life for years, so when the opportunity came up to become Interim President and CEO, it was an easy decision to make,” Greene said. “These last few months have exceeded my expectations, and I’m looking forward to continuing to build relationships with our officers, board, members, and industry partners.”

During his interim period in August, Greene helped oversee the 2021 AAHOA Convention & Trade Show in Dallas, which marked the association’s return to in-person events after a year of restrictions from the COVID-19 pandemic. The convention, which drew more than 6,000 attendees, was the first such event in the city since the start of the pandemic.

“As a former brand executive in the hospitality industry, Ken has significant experience working with AAHOA members and a solid understanding of what hoteliers need,” said Vinay Patel, AAHOA’s chairman. “He knows what drives our members and how our association can assist them as the industry recovers.”

Prior to his time at Radisson, Greene also served as president and CEO for Delta Hotels and Resorts, and in various roles at Cendant Corp. and Wyndham Worldwide. He recently founded Greenehouse Consulting, which focuses on acquisitions, management, and advisory services to the hospitality industry.

Still no explanation has been offered for Staton’s departure. On the same day that Staton’s resignation was announced, AAHOA also said that Rachel Humphrey, the association’s executive vice president and COO, would be resigning the day after the convention in Dallas finished.

Several AAHOA members came forward after news of Staton and Humphrey’s departure broke to say the resignations signaled a welcome change. They said the association has strayed from its original mission of defending hotel owners against exploitation and failed to follow its own bylaws. 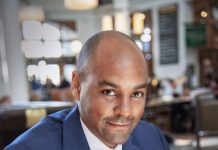