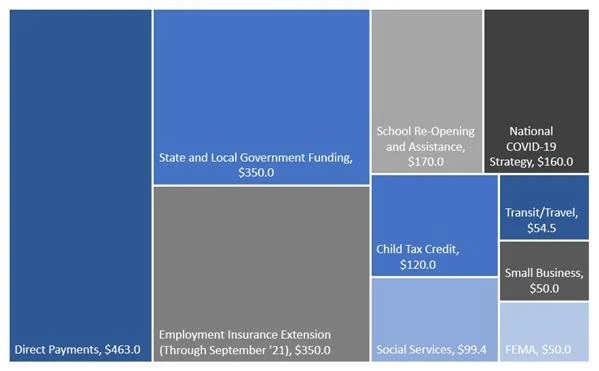 HOTEL OWNERS AND associations have been calling for more federal aid since the beginning of the COVID-19 pandemic last March. The stimulus bills passed so far have had increasing impact on helping the hospitality and travel industries survive the downturn, and there is much to be looked forward to from President Biden’s proposed package, according to a report from consulting firm HVS.

The pandemic has impacted the entire economy and two relief packages have been passed since its beginning, according to the article from Thomas Hazinski, managing director of HVS convention, sports, and entertainment facilities consulting in Chicago, and research analyst Joseph Hansel. The first aid package, the Coronavirus Aid, Relief, and Economic Security Act, provided the least amount of help for the hospitality and travel industries.

Travel alone lost around $500 billion since March, the article said citing data from the U.S. Travel Association and Tourism Economics.

“The economic stimulus provided in the CARES Act did help state and local governments, but key considerations, such as excluding 501(c)(6) organizations like [destination marketing organizations] from receiving Paycheck Protection Program funding, left travel industry stakeholders without direct economic stimulus,” Hazinski and Hansel wrote. “Among the top 20 DMOs, on average, 81 percent of their funding comes from the public sector and in most cases, funding for public sector agencies relies on taxes on services related to tourism.”

While the CARES Act failed by leaving out parts of the travel and hospitality industries, the second round, the $900 billion Consolidated Appropriations Act passed in December. Among other things, that bill included $325 billion for small businesses, including $284 billion dollars for the Paycheck Protection Program that provides loans to struggling businesses, including hotels.

“In addition to solving individual and societal dilemmas, the second round of stimulus provides more direct assistance to the tourism industry,” the article said.

The second stimulus bill also expanded the PPP program to include DMOs to allow some of them to receive loans for operating expenses that will be forgiven later.

“The long-term viability of DMOs and other promoters of tourism will be vital for the rapid recovery of the tourism industry when public health measures allow for unabated travel and tourism,” The article said.

Now, for the third round of federal relief, President Biden has proposed an even more expansive $1.9 trillion package. That bill, which is expected to pass, includes another $50 billion for small business assistance.

“Combined with the prior $900 billion package, government spending would provide $2.8 trillion in economic stimulus. The greatest impact of this legislation on the hospitality industry would result from a faster economic recovery as the new government spending more than replaces the GDP lost due to the pandemic,” Hazinski and Hansel wrote. “Leisure and business travel is likely to resume faster in a healthy economy. Direct aid to state and local governments will allow them to continue or reinstate support for publicly funding convention centers and destination marketing organizations.”

Current projections are that the travel industry will start to fully recover in the second quarter, if the third federal stimulus package is approved and if the vaccine distribution continues successfully.

“Should President Biden’s proposed stimulus package, which includes $20 billion for a national vaccination program and $15 billion for additional small business grants beyond the PPP, pass, the travel industry may be able to recover through a return to normalcy, the return of large public gatherings, and sustained financial support for key industry participants,” the article concludes. “Of course, the future of economic stimulus for the travel industry lies in the hands of Congress. In the interim, travel industry stakeholders continue to wait, hopeful for a rapid return to health, travel, and normalcy.”