RED LION HOTEL Corp. President and CEO Greg Mount has resigned from his position with the company and its board of directors Friday in what the board deemed a “necessary action.” At least two owners in the company’s recently acquired Knights Inn brand say the resignation does not surprise them and they plan to leave the company as well out of disappointment in how the brand has been handled.

Mount’s departure is part of a plan to restore confidence in the company, Chairman of the Board Bob Wolfe said in a statement.

“The board recognizes the operational performance of the company has not progressed as anticipated. Action was necessary, starting with a search for a new CEO,” Wolfe said. “To that end, the company is focused on delivering superior value and service to our franchisees to stem the pace of terminations, restructuring franchise sales efforts to accelerate franchise growth, and right-sizing the cost structure of the business to reflect RLH’s current size, revenue and profitability requirements.”

One of those franchisees, Mital Talati who owns a Knights Inn in Fayetteville, North Carolina, said she was not surprised, or concerned, about Mount’s departure.

“I have already made up my mind to quit RLH Corp. by the end of the year and move to another brand,” Talati said. “The company’s fees went high in many areas this year at the same time their support system was a joke. They never had right people to answer my questions.”

Talati, who last year received a Humanitarian Award from RLH Corp. for sheltering Hurricane Florence victims at her 62-room hotel during the storm, said other owners share her feelings “nothing was going right” for Knights Inn after the acquisition and RLH Corp. was not bringing in enough revenue for the brand.

Last year, Amish Patel, CHO for AMP Hospitality Management in Palm Harbor, Florida, had urged his fellow Knights Inn owners to be patient with the transition into the new company. Today, however, he also plans to leave the RLH Corp. system.

“Every owner I’ve spoken with has been unhappy,” Amish said. “I’m basically taking both of my hotels away from them.”

Last month he took in 368 reservations from third party bookings and only 16 from the RLH Corp. reservation system. At the same time, the company charges the owners $3.50 for every third-party reservation.

“Not only are they not sending us business directly, they’re charging us above and beyond what the OTAs are charging,” Amish said.

He also is concerned about the company’s ability to support franchisees’ needs.

“They don’t have enough people back of the house to support the hotels they have,” he said.

There’s also a substantial time difference between RLH Corp. headquarters in Denver and many properties on the East Coast.

Amish said he will operate his hotels as independents. He has heard of similar problems with other brands.

“Every brand is doing the same thing,” he said. “They’re starting to nickel and dime you.”

Editor’s note: This story has been updated to included Amish Patel’s comments. 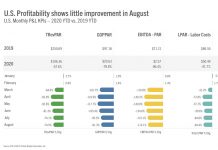